Share a Sunday in the suburbs with Brisbane’s eclectic uke/bass duo Tyrone and Lesley, as they debut their Christmas album Ashgrove’s Junk Bar. Tyrone (ukulele/vocals) caught up with Creative Drinks to give us the scoop on the show.

Tyrone and Leslie are a uniquely Australian duo – a little bit Lano and Woodley, a little bit Kransky Sisters, a little bit Franciscus Henri – at times performing covers of songs from the 1930s (“in Brisbane in the 1990â€™s, which is a very negative equation”) while racking up original albums Ukulele Heart (2012), Bear with MeÂ (2013), and Gentlemen Songsters (2014). The pair have played everywhere from regional ukulele festivals to the Queensland Music Awards to the Sydney Opera House. Their jaunty, whimsical repertoire often invites you to up gentler, sepia times you weren’t alive for, encapsulating the highs and lows of human existence – dog ownership, regifting and the simple comfort of a teddy bear.

If the prescribed seasonal Christmas mixes leave you out in the cold, and you want something shiny and new for Christmas, this gig will see the pair debut songs from their long-awaited Christmas album Baubles. The Junk Bar’s “secret” Skukum Lounge is the perfect venue for these two, modelled after a wood-panelled cabin and lined with eccentric artifacts.

In true Christmas spirit, all proceeds from the showÂ  go towards the Smith Family, helping disadvantaged Australian children and families. Further donations can be made here.

CD: Why should we be excited for your Christmas gig?

So you can say you were there! Itâ€™ll be like being the first at the tree on Christmas morning, except with songs instead of presents. If youâ€™ve ever suspected that maybe Christmas isnâ€™t all itâ€™s cracked up to be, then this is the show for you. As well as playing the hits youâ€™ll be able to laugh at our Baubles.

Since the crowdfunding thing we did last year, for our third album, a lot of folks have been wanting to listen to our Baubles. Baubles is a funny Christmas album weâ€™re writing, weâ€™re really keen to unwrap these new tunes, because you can only play a new song for the first timeâ€¦once.

Weâ€™ll play our hits, and then itâ€™ll be like one of those â€˜classic albumsâ€™ shows except for an album that we havenâ€™t really recorded yet.

Weâ€™ve played more gigs interstate this year than at home here in Brisbane, so itâ€™ll be a bit of a homecoming for us, as well as the last gig of the year. Most importantly, The Smith Family is a charity that helps disadvantaged Australian kids, and proceeds of the gig will be going to them.

CD: Whatâ€™s your favourite thing about theÂ ukulele as an instrument?

Tyrone: Itâ€™s sweeping the world right now, isnâ€™t it? Thereâ€™s something about the uke that brings people together. I like that aspect. When itâ€™s played tenderly, youâ€™ve got to lean in to hear it. You have to hold it close to your heart to play it. Weâ€™ve all got baggage, but a ukulele is cabin baggage. Lesley normally plays double but might bust out his U-Bass for this gig. He goes nuts on it.

Tyrone: Itâ€™s got a nice ring to it, that phrase, doesnâ€™t it? Iâ€™d never heard it until it was suggested by a fanâ€“ when we did the crowdfunding thing we offered the reward of writing a song inspired by fan suggestions, and â€˜Gentlemen Songstersâ€™ was one of those. We wrote a song of the same name which ended up being the title track of the album. The fan was the first to hear it and they loved it. Rightly so, may I say, because it turned out beautifully.

One of the key lines in the tune is â€˜how can it be wrong/ to find love in a songâ€™ and I think that sums up what it might mean to be a â€˜Gentlemen Songsterâ€™.

Since we wrote it, Iâ€™ve realised the phrase is connected with male choirs and barbershop singing, as is this particular fan. We sent them a recording and a chart and Iâ€™m told theyâ€™ve performed the tune in their own group! 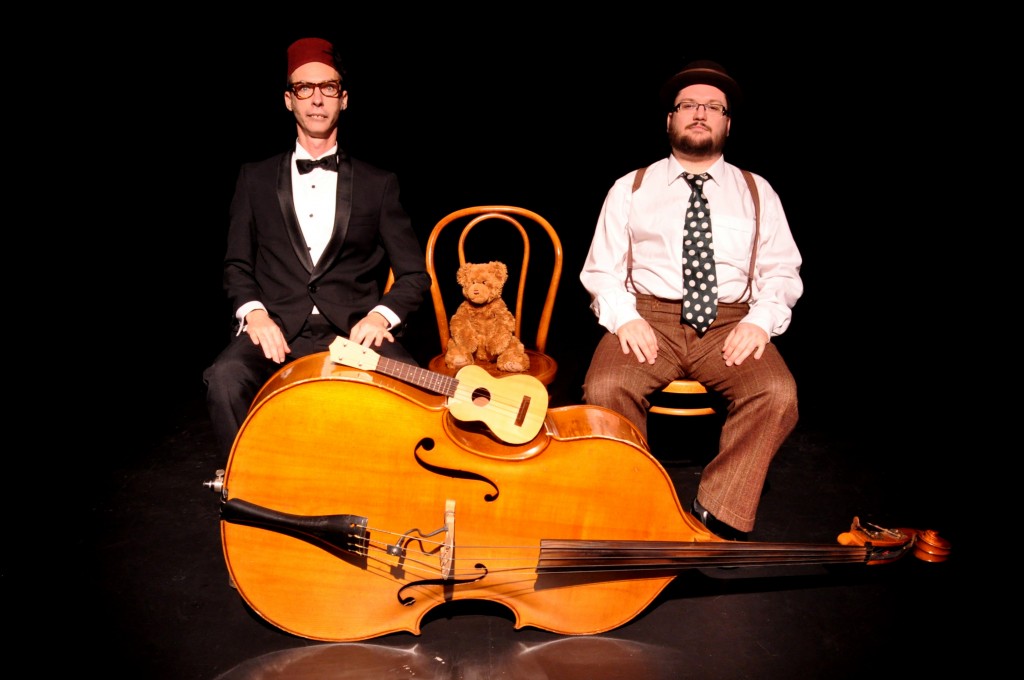 “Too much to bear” (photo Joyclyn Vincent)

CD: Can you describe the dynamic between you and Lesley? What are some of the advantages of performing as a duo?

Tyrone: Well, Lesleyâ€™s on double bass, and Iâ€™m on uke. Thereâ€™s a large littleness that weâ€™re playing with there. Thereâ€™s a respect and balance in what we do. Good collaborations are a treasure, they enable you to do something that neither of you could do on your own, thatâ€™s true of us. When weâ€™re writing something new, Iâ€™ll want to shout it from the rooftops and Lesleyâ€™ll want to spend another week or two working on perfecting it. So thereâ€™s a balance between us of the mercurial and stoic.

Weâ€™ve been working together since 2002, when we did a show that ended up with us playing at the Sydney Opera Houseâ€“ weâ€™ve been through a lot together, and we keep getting better! Thereâ€™s still an irrepressible joy we experience when weâ€™re working on a new song, or playing live that I think our audiences like too.

CD: What are your thoughts on bears?

Tyrone: Youâ€™re asking because of â€˜Bear with Meâ€™, arenâ€™t you? Thatâ€™s a show we made, a concert for bears, thatâ€™s been very successful. Bears really like music, but they canâ€™t get to shows on their own, so their children have to bring them. Everybodyâ€™s got, or had a bear in their lives, and you can get all cutsey-wutesy about that, but thatâ€™s not our bag. Bears are both fun and really important at the same time. Worth writing an album and show about, so we did. Weâ€™ve done this show in Brisbane, Melbourne and Perth, and weâ€™re taking it to Adelaide next Year for Windmill Theatre. We can bearly wait!

CD: Who do you prefer performing for: children or adults?

Tyrone: Thatâ€™s a good question. People tend to think that children are either too wild, or too easily pleased, and theyâ€™re neither. Cairns uke duo Bosko and Honey once said that we write â€˜childrenâ€™s songs for adultsâ€™, and I think that sums it up. The second thing that springs to mind is something Maurice Sendak, author of Where The Wild Things Are once said. â€œYou cannot write for children… They’re much too complicated. You can only write books that are of interest to themâ€. So somewhere between those two thoughts is my answer to that question!

I should say that this Baubles show is for grownups only because the venue is 18+ and at times the show may be quite immature. See you there!

Regifting – a Christmas song that keeps on giving